Last spring 16 students were chosen for a special project course ENA9 the topic of which was “Storytelling”. The course was held in the first period and it was culminated after autumn holidays, when the whole group headed for Edinburgh, Scotland. The teachers in charge of the project course and arrangements in Edinburgh were Sari Hopeakoski and Riitta Kilpeläinen.

Our first day in Scotland. After a long and tiresome morning of flying, Edinburgh welcomed us with a shining sun and clear skies. After settling in at our hostel we made our way to the National Library of Scotland for a live Storytelling event called “Scotland meets India”: An Auld Acquaintance. This event was based around the long-standing friendship between the UK and India and it was hosted by Scottish storyteller Marion Kenny and her Indian colleague, Deepa Kiran.

At the entrance we were greeted with big smiles as we took our seats in the Visitor Centre. Once everyone was seated, the lights dimmed and we heard the Scottish storyteller, Marion Kenny, perform Auld Lang Syne by Robert Burns on the flute. After this performance we saw Deepa Kiran display some Indian dancing. From Marion we heard some stories from the time she visited India as well as a tale about the birth of Robert Burns. Marion also told a tale about St. Columbkille, the first missionary to Scotland. Deepa Kiran provided us with some beautiful stories which originated from India. On top of that, she sang a Bengali transcription of Auld Lang Syne. Overall, the event was very down-to-earth and the audience was able to participate and comment and even tell their own versions of the stories we heard.

To tie it all together, the hosts performed Auld Lang Syne one more time and the crowd sang along with it. Then we returned to our hostel, which was as a matter of fact really clean and enjoyable for a hostel, and we were tired. For us, the day felt like forever since we were two hours behind Finland’s time and we had been awake for over 12 hours already.

We got a positive impression about Scotland right from the start and we really enjoyed the weather. The group seemed great and the planned program sounded good so it was clear that we would be expecting a fun and exciting trip to be ahead of us.

We started the day by eating breakfast at our hostel. There was an option of coffee or tea, toast with jam or butter. We could also choose from multiple cooked items like sausages and eggs. In addition there was fruit and yoghurt. All very British.

After filling our stomachs we made our way through the city to the Edinburgh castle. The castle stands on a hill so there was a stunning view. It was sunny so we got some great photos. The area inside the castle walls was huge and it was cool to have access to the old dungeons and hallways. We had about two hours of time to explore this magnificent and beautiful old castle. To be honest, we had no idea that Scotland had such a rich and diverse history. One fascinating fact of this old castle is that after a mass prison break from the prisons of the castle of Edinburgh in 1811 led to the closure of the prisons but during both of the world wars the prisons were reinstated to its old duty.

Next we got on a bus on the North Bridge. We got off near the Royal Botanic Garden. There we walked through a huge glass house filled with plants, to get to a conference room. There was held an interesting storytelling hour. Storyteller Daniel Allison and musician Lally O’Keeffe combined their skills to orchestrate a quite powerful session. The main theme of the many stories we heard were to shed light on the massive problem of animals vanishing from Scotland because of people. Animals such as wolves, bears and lynx have all disappeared from Scotland, but for example the wolf might be returning to the forests of Scotland through the hand of humans. Stories we heard were old folk tales that offered some perspective on the discussion of vanishing animals.

The storyteller told three tales about woodland creatures and rewilding Scotland. He was really funny and talented. He also had a charming Scottish accent, which made the stories feel more local and real. Almost historic.

The rest of the day was spent exploring the Royal Mile. We had dinner at KFC.

On Thursday we took a guided bus tour to the Highlands. We woke up around 6am and had breakfast before we left the hostel. It took a few hours before we made it to the Highlands. It’s a big area so we drove towards Loch Ness for another few hours after our first stop in a small village. Mainly our stops were for about 15 minutes so we could use the toilet and walk around a bit. We had our lunch break at Loch Ness where we had over an hour to go around and take pictures. 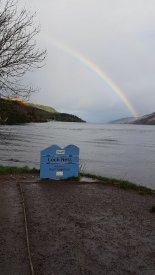 There was this small beautiful village that had plenty of stores in it. We took some photos of the famous Loch Ness although we didn’t see the monster :(. We wanted coffee so we went to a cafe and started to speak Finnish telling how we felt about this trip and you know general small talk. At some point the older man who was behind the counter asked where we were from. When we said Finland he was like “cool we don’t get many Finnish tourists in here”. Then we chatted about the Scottish landscape and about the Finnish weather. We showed him pictures and that there were huge amounts of snow in Helsinki. He seemed shocked and said “you guys better move to Scotland,it is much warmer here”. We also fooled them by saying that there are many polar bears in Finland. And they believed that! The younger man, probably in his twenties, fixed Jasmin’s broken backpack with a stapler. It didn’t take a long time, but it was a nice gesture. 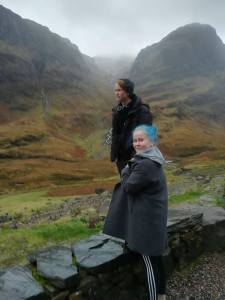 We spent most of our time in the bus looking outside the windows admiring the beautiful hills and nature around us. It was totally breathtaking and relaxing to sit down for a minute in the middle of such a beautiful scene. Our bus driver was called Steve and during the drive he told us stories and facts about Scotland. Whenever he wasn’t talking or telling stories he played us Scottish traditional music that enchanted the atmosphere. In total the bus trip took about 12 hours which was tiring. Most of us slept on the way back to Edinburgh

Friday was the easiest day to wake up. Though, the night had not been so easy. The fire alarm had gone on at three in the morning. Our entire room woke up to wonder what it was, but it ended as quickly as it started, and everyone went back to sleep.

In the morning we found out the alarm was triggered by someone smoking a cigarette in the bathroom. After eating breakfast, we headed to the National Museum of Scotland, which is an exquisite building. There we had a few hours to look around. The museum had many impressive exhibitions.

For lunch we agreed to have a classic fish and chips, but most of our party still ended up having something else.

At noon we quit our tour at the museum and had almost two hours to have lunch. We were able to buy some gifts for our families, among other things Scottish shortbread. We saw lots of Harry Potter themed shops in Edinburgh and that’s not a surprise because the author of Harry Potter books, J. K. Rowling, got inspiration to many places in her books from Edinburgh and Scotland.

After lunch and some gift shopping we headed to the National Library of Scotland. The last Storytelling event we attended was held there. It was called “Tales from the New World” by storyteller Mara Menzies. First she told for us about her journeys in Cuba and Utah. She told tales she had herself presented there and heard from other storytellers while visiting those countries. The stories had their own atmosphere depending which country and culture it was from and represented.

She took the audience into part of her storytelling. It kept us alert during the event – some of us were continuously afraid she would ask us to do something. She used lots of gestures to animate tales she was telling. An hour passed really quickly with her.

In the evening, at 7 pm, we all 18 went together to have dinner at Nando’s. Unfortunately some of us got their meals later than the others. Many of us were very happy about their choices, though,  and it was nice to spend some time talking and having dinner together.

But that is almost everything for Friday. The next day we headed back to Finland, so the rest of the evening went by packing and preparing the leaving. Bye-bye Edinburgh! This was a nice experience and we learnt a lot of new things.